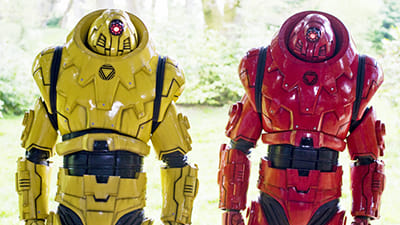 Clyde and Rani only just manage to escape from the robots.

Regrouping with Gavin in a cafe, Clyde deduces that he and Rani were left behind after the robots abducted everyone else because of the two of them having been ‘grounded’ by the Judoon, although this fails to explain Gavin’s continued presence. When Gavin runs off again, Rani and Clyde are confronted by the robots, who explain that they want the ‘son and heir’ (Although Clyde initially assumes that they want Earth’s sun and air); Gavin’s father – who he mentioned left his mother when he was young – was an alien prince, and with his father’s recent death Gavin is the only viable heir to the throne.

Tracking Gavin down, Clyde and Rani explain the situation to him, convincing him to remove a ring that his father gave his mother to give to him; the ring acted as a bio-damper that prevented anyone from detecting his alien heritage. With the ring removed, the robots can sense him, and he agrees to accompany them back to his father’s world, his last actions on Earth being to name Clyde and Rani a Lord and Lady of his people.

With Earth’s population returned – having been sent to a ‘warp shunt’ while the robots searched – Sarah and Mr Smith create the necessary records to state that Gavin has moved to Australia, Sarah praising Clyde and Rani’s accomplishments even when they were alone.